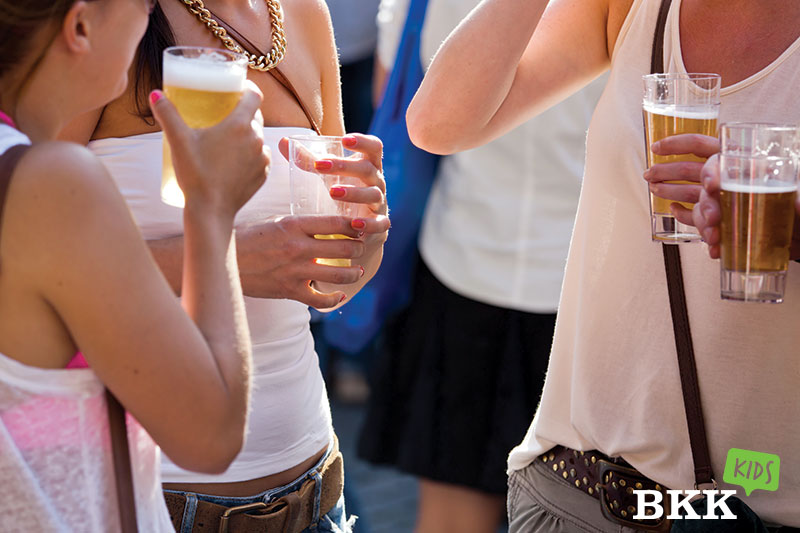 Because they’ll probably do it anyways.

Leniency in alcohol law enforcement is an ongoing concern in Thailand. With early exposure in a mass drinking culture, it is elementary for youngsters to encounter their first drinks at an early age. Despite (enforcing) a drinking age of 20 and disallowing supermarkets to serve alcohol between 2pm to 5pm and 12am to 11pm, it is still easily accessed. The trick here is that it is up to bar and store owners to enforce this law. Consequently, we find that many do not ask customers for identification simply as a way to increase their profit margin. For those that do ask, fake IDs are abundant and tend to make the cut.

It’s easy to get caught in the pickle. What do you do if you’ve told your child not drink and they still do it?

The answer will always be grey.

Much research that has revolved around the concern of early alcohol consumption found that instructing your child to refrain and abstain from X will only increase the likelihood of their actions towards X, as well as increase the risks associated with X.

New research leans towards harm reduction, which are a set of practical strategies and ideas aimed at reducing negative consequences associated with alcohol use.

This approach is different in the sense that the goal isn’t to necessarily reduce usage. I know this doesn’t sound appealing, but don’t stop reading just yet. Although the goal isn’t to directly reduce usage, this approach tends to control usage more than the abstinence approach most adults tend to engage. This is in-line with sex-education. Studies released have found that teenagers that are taught to abstain from having sex or engage in sexual behaviours have their first sexual intercourse at the same age as most teenagers (ages: 17/18) but have higher rates of STD and pregnancy (due to their lack of education on how to go about such situations safely). This is congruent with drugs and alcohol.

It is good to educate your child on the health risks associated with drinking and the cognitive defects that may occur when they begin consuming alcohol at an early age. Saying NO is a potential first step. But we all know that a simple “no, don’t do it” is always challenged. To ensure that your child engages in such behaviours safely, here are a few harm reduction tips you can give them:

Moreover, it is important to explicitly rank the potential harms of alcohol for your child. It is also important to acknowledge the reasons your child may be engaging in such behaviour, whether it is social or due to stressors.

Parents should also keep in mind that 72% of students have consumed liquor by the end of high school, and that more than 37% have done so by the eighth grade. It is safe to say that your child is not an anomaly. Rest assured, I am not asking you to advocate drinking to adolescents, but rather, support safe-drinking amongst those who are simply going to do it anyways.

ROCKADEMY is a music school, for students aged 7 and up, built on the belief that “the best way to learn to do almost anything

As Bangkok’s longest running drama school, Curtain Up Drama & Magic have a wide range of classes and offer a variety of workshops so there