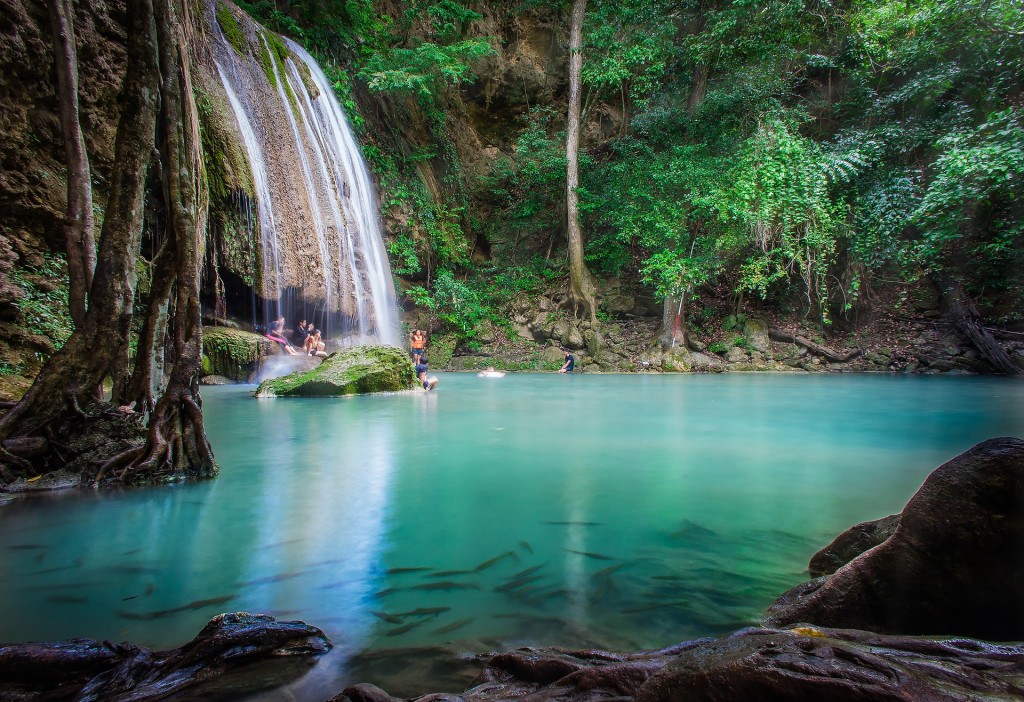 Thailand’s third largest province, Kanchanaburi offers lush hilly terrains and plenty of natural wonders: waterfalls, caves, jungles, and the key waterways of Kwai Yai and Kwai Noi that merge to become the Mae Klong River. The area also serves as a sobering reminder of the horrors of war, as the setting for the Death Railway and other atrocities during World War II.

Below are 10 places to visit with the family in this fascinating province.

1. The Bridge of the River Kwai (map)

The iconic steel bridge, also known as the Death Railway Bridge, is located in Muang District. Built by Allied prisoners of war and other conscripted labourers under Japanese command during World War II, the 300-metre bridge played an important part in the rail link between Thailand and Burma. Today, some parts are still in use, while also serving as a war memorial. You can walk on the bridge and take photos, but watch out for the oncoming train! Nearby are the war cemetery, where 7,000 prisoners of war are buried, as well as the JEATH War Museum (some photographs and displays may be scary for children).

Another great attraction for some adventurous family fun is to paddle board along this infamous river and SUP Thailand offer workshops, lessons and day excursions in some amazing natural environments around the Kanchanaburi countryside.

Started by a Thai vet, ElephantsWorld is a sanctuary for injured, elderly, ill, and former working elephants. There are strictly no elephant rides or shows here — instead, visitors roll up their sleeves and get to work, preparing food for, bathing, and feeding the elephants. The Overnight Program includes a stay in a traditional Thai-style cottage beside the river with the chance to walk the elephants to and from the forest. The organisation is funded exclusively by visitors, with earnings going towards the comfort and care of the elephants for the rest of their lives.

Situated at the Royal Thai Army’s Division of Veterinary and Agriculture 1 in Dan Makham Tia district, this 100+ year old rain tree (‘Chamchuri’ in Thai) won’t fail to make an impression with its 20-metre height, canopy that spans over 50 metres, and massive trunk. The latter takes about 10 people to encircle with their arms outstretched.

There’s no better place to beat the heat than at Sai Yok Noi. The waterfall has broad natural limestone ‘steps’ where visitors can lie down in the cool, cascading waters on multiple levels — all while surrounded by shady, lush surroundings. It is best visited during the rainy season from July to October, when water levels are higher and the flora is in its full glory. Pack some lunch for a picnic, and bring towels, swimwear, and sun protection for a day of fun! The waterfall is located about 2 kilometres from Nam Tok train station (the last stop in the Death Railway) and about 60 kilometres from town.

Covering over 550 square kilometers, Erawan National Park is rich in plant life, wildlife, and natural formations, including limestone caves and peaks, and the spectacular multi-tiered Erawan Waterfall. At the first tier, you can take a dip or simply dangle your feet in the water (beware of vigorous nibbling from the resident fishes though). You can explore other tiers (the first three are do-able with kids) but as you go higher, be wary of steep climbs that may be unsafe for young children.

Go back in time to the era of King Rama V (1873-1910) at Mallika City, a living heritage town that depicts the former Siamese lifestyle in the Chao Phraya River Basin. Staff dress, talk, and work as if they were back in that period. Located in Sai Yok district, Mallika’s expansive grounds cover around 60 rai, with several zones to explore. Take in traditional Thai architecture, exchange money to old coins to buy things, sample a variety of foods, and rent traditional clothing to really get into the essence of this meticulously recreated city.

The Hellfire Pass Memorial Museum in San Tok district offers historical information about the construction of the Death Railway, especially the cutting of solid rock to make the infamous Hellfire Pass — the largest and most deadly section of the railway for the labourers. Visitors receive a headset upon entry that gives first-hand accounts from the survivors. Delve into their experience further by hiking a 4-kilometre walking trail, starting behind the museum and following the original rail bed, that shows the rugged, grueling conditions the workers endured for 18 hours a day. The trek is challenging, especially in the mid-day heat, and takes around 3 hours, but you can also just walk down a short section of the trail or arrange to be picked up at the 2.5 kilometre mark near Hin Tok Station.

For a bit of culture, head to Wat Tham Seu (‘Tiger Cave Temple’) in Tha Muang district. Situated on a hill, the temple features stunning 360-degree views of the surrounding paddies, dam and river. You will have to climb up a long flight of steps (or take a cable car), but it’s worth the effort. Have a look at the temple’s huge, gold mosaic-covered Buddha image, reflecting a unique style of artistry, as well as stupas and a Chinese-style pagoda at the adjacent Wat Tham Khao Noi. Remember to dress appropriately (i.e., no shorts, sleeveless tops, body-hugging clothing…). There is also a small cave (the so-called ‘Tiger Cave’) at the base, near the cable car, that you can explore.

Want to try out your paddle boarding skills? Look no further than SUP Hire Thailand who not only offer one day lessons, team building workshops but some family friendly days out and adventure camps for kids all packaged in some stunning natural environments, just 2 hours from Bangkok.

This adrenalin-filled excursion in the jungles of Kanchanaburi is definitely one for families with older children. Attractions include a Money Swing course that boasts a combination of 30 stations, zip lines and treetop-based games. You can also ride a skybike over the tree canopy, while those with a serious head for heights can buckle up for a ride on the giant zip line, which spans the entire length of the park’s lake! The program here isn’t suitable for children under 140 cm in height, and children less than 12 years old must be accompanied by an adult.

Ascot is offering scholarships for girls in the academic year of 2022-2023. Registration now opens, please…