Commissioned by King Rama I to house a 13th century bronze Buddha image from Sukhothai, Wat Suthat is one of Bangkok’s oldest temples. It features impressive architecture, magnificent wall frescoes depicting the previous incarnations of the Buddha, and ornate carved teakwood door panels. The cloister surrounding the main chapel boasts 156 Buddha images along the outer walls, along with Chinese stone sculptures and eight-tier hexagonal pagodas believed to have been shipped as ballast with Chinese trade vessels.

The striking 21.15 metre-tall red Giant Swing that stands at the temple’s entrance boasts an interesting history. The original Giant Swing, dating from 1784, was replaced in 2004 with a new one crafted entirely from golden teak – no easy feat. In the past, the swing was used in Brahmin ceremonies to celebrate the main rice harvest; participants would achieve heights of over 20 metres from the ground. Several injuries and deaths led to the end of this practice in 1932.

Wat Suthat and the Giant Swing are great attractions for the entire family. Children will enjoy exploring the temple grounds, and learning about the history of the swing. You can combine a visit to Wat Suthat with the nearby Grand Palace, Temple of the Emerald Buddha, Wat Pho or Sanam Luang. 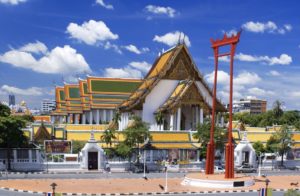