Officially known as Wat Phra Sri Rattana Satsadaram, the Temple of the Emerald Buddha is regarded as the most revered Buddhist temple in Thailand, an architectural wonder of gleaming, gilded stupas. Located within the grounds of the Grand Palace, it enshrines Phra Kaew Morakot (the Emerald Buddha), meticulously carved from a single block of jade and adorned in garments made of pure gold. The Emerald Buddha has endured an epic journey from northern Thailand where it was seized by Lao forces and carried to Vientiane, only later to be recaptured by the Thai’s in 1432. According to legend, the Emerald Buddha was created in India in 43 BC by Nagasena, in the city of Pataliputra (Patna).

The temple may not interest young children, but offers older children a great insight into the history of Buddhism within South-East Asia. 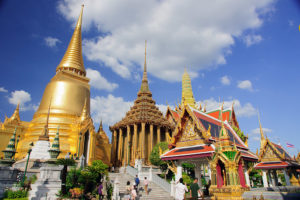