Founded around 1350, Ayutthaya offers an interesting day trip from Bangkok. Siam’s former capital city, following Sukhothai, and one of the world’s great trading centres during its heyday, Ayutthaya, by 1700, had become the largest city in the world with a total of 1 million inhabitants. International merchants flocked to the city, from diverse regions as the Arab world, China, India, Japan, Portugal, the Netherlands and France.

Today, Ayutthaya is a UNESCO World Heritage Site. Despite being razed to the ground by the Burmese in 1767, the city still houses grand ruins of temples, palaces, large Buddha images and stupas. These stone remains give a glimpse of the impressive past. They are spread out over a large area, so the best way to explore the ruins would be by bicycle or motorized tuk tuk, which can be rented for the day. Most of the temples offer free entry; the larger ones may charge a nominal fee.

It takes about 1.5 hours to drive to Ayutthaya from Bangkok (around 75 kilometres). You could also get there by train, which departs from Bangkok’s Hualumphong Station and stops in Ayutthaya. The duration of the trip is around 2 hours, faster with an express train service.

Info on what to see in Ayutthaya with kids can be found on our blog. Also, drop by Ayutthaya Tourism Centre (open daily from 8.30am to 4.30pm) for more details on things to do; the centre also serves as an art gallery.

Generally, most people visit the huge Ayutthaya Historical Park, which encompasses the UNESCO World Heritage Site zone, containing 67 stunning temples and ruins as well as the former Siamese capital city. Set against greenery, the park offers visitors a look into the grandeur of Ayutthaya’s past. This site includes Wat Phra Sri Sanphet, which served as the most stunning temple over 700 years ago, built on old palace grounds. Today, three ancient and exquisite stupas remain. Also, to see the famous Buddha head set among tree roots, among other ruins, visit Wat Phra Mahthat.

Other notable attractions include Wat Chaiwatthanaram, a picturesque temple situated on the west bank of the Chao Phraya River. It houses eight chedis that are attached to secret passageways with vibrant illustrations of the life of Buddha on its walls. There are 120 sitting Buddha statues, draped in orange robes, scattered around the area. Wat Lokaya Sutha features a 42-metre long reclining Buddha, wrapped in brightly colored saffron cloth, as well as fantastic ruins of temple structures. 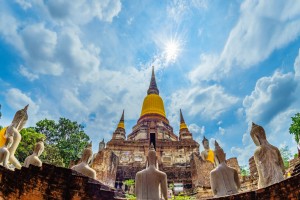 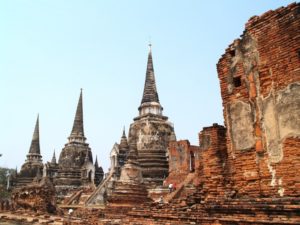 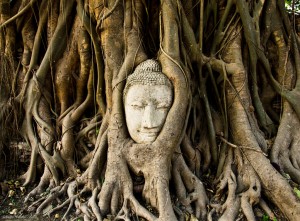 Moste temples offer free admission; some of the larger ones have a 50-baht entrance fee per adult.