Newborns are jus the worst communicators, wouldn’t it be nice if when we are trying everything to stop our babies crying they could just tell us what they want. Crying and discomfort especially after they have been fed are often signs of reflux. Babies are prone to this because of their under developed anatomy. The Sphincter at the top of the stomach is not as strong in newborns as in older babies, which is why you often find symptoms improve before a baby’s first birthday.

Reflux is considered as one of the more common occurrences in infants. Perhaps, because it is almost always seen as “normal”, or even deemed insignificant, it is one topic that is seldom discussed or talked about as openly, especially when it comes to coping with the challenges of having a reflux baby.

When your baby does have reflux though, it can sometimes be hard to make sense of things. Not only has your life been turned upside-down and inside out with the arrival of a new family member who has mistaken day for night and night for day, your days get even more exciting as you become painfully aware that your baby might just have The Reflux.

Before my second child, Squirt, was born, at least 2 or 3 out of 4 mother mothers I know told me that their child has had some form of reflux. While I understand and (try to) sympathize with their predicament, I don’t think I actually understood the full extent of having a child with reflux and the way it can consume your life. I don’t think I realized just how disruptive life can be when your child has reflux.

As cliché as it  may sound,  only those who have experienced it for themselves could really understand how it impacts the child’s eating, sleeping, behaviour or quality of life; not to mention the parents  and the well-being of the immediate family members and their relationship.

Citing from one of the many sites which I came across, reflux is not just “a bit of vomiting” or a simple issue of “the baby is just being fussy”  or,  “ it is just gas and it will pass”.  If only it was THAT simple.

Rather, as suggested by several articles I have come across during my extensive research to cope with my son’s reflux, there is more serious side to reflux in infants where it can cause complications or long-term problems otherwise labeled as a Gastro-Oesophageal Reflux DISEASE (GORD/GERD). It is different from a Gastro-Oesophagael Reflux (GOR/GER).

Definitions of the 2 are as follows:

Yes, reflux in infants is known to be hereditary. While my son’s (then) reflux condition was not as severe as to how much worse it could have been based on what I have read on the Internet, it was bad enough to warrant medical intervention.

If you are a heart-burn sufferer or ever had a really bad heart-burn during your pregnancy, you would have an idea what an acid reflux is. Imagine that happening to a little tiny baby of only a few weeks old!

Some of the signs which my son had that was atypical of GORD were:

Needless to say, my child was not a very happy baby in the earlier stages of his life – which makes my job as a mother even harder than it already was. When not sleeping, he spent most of his time screaming his guts off. He appeared to be in constant pain for most of his waking hours; especially during and after a feed. Every day was a battle, and it hurt me to hear his inconsolable cries after every feeding.  Each burping session which could take up to half an hour, and often followed by several bouts of crying. My only consolation at that point in time was that despite his constant screaming, he was still gaining weight. He kept on feeding – more as a defense mechanism to keep his food down which then became a vicious cycle.

We took a calculated decision to get him on medication when he was barely 3 weeks old. If anything, we were glad that we discovered it early enough and that, when we finally took him to the doctor, we were not being dismissed by our Pediatrician. In fact, he was quickly referred to a specialist by the name of Dr. Mingmuang from Bumrungrad who lovingly and attentively attended to Squirt throughout his reflux journey – and never once did he dismiss our concerns and worries. At the same time, it was also reassuring to know that most infants will outgrow GOR by one year of age –although it had seemed like a very long time then!

Squirt is now a few months short of being 2 years old, and has been GOR-free since he was 8 months old. Even though he did not show any serious complications, he (and us!) were mostly miserable, exhausted and just plain wretched throughout the entire time.  With medication, we saw that he had was greatly relieved from the reflux pain; and me, some sanity and respite from very heart wrenching cries.

Although we did not experience the worst reflux of its kind, we now know enough that having a reflux baby can be traumatic for those involved. It is one of those conditions that are easily dismissed, even trivialized, and I cannot imagine how much worse it would be for us (or any other parents for that matter) had we not get it diagnosed early enough.

The whole journey had been a very steep learning curve for us. Looking back, I learn that there had been no breaks to tending to a reflux baby. I learn to trust my own instinct as a mother more, that when something does not seem quite right, the gut is often seldom wrong. I also learn to relinquish any super-mom control I had in my head as the grand master of problem solver and accepted that no matter how silly or “small” I think the problem was, it is always OK to seek a doctor’s opinion. Most of all, as much as I hate to medicate, when push comes to shove, a medication with no known side effects would save your baby (and your sanity) from a whole lot of other grievances than just choosing to ride it out.

It was tiring, but a very humbling experience to parenthood. It was our test of endurance.

Editors Note : This article has been re-written for BKK Kids by Ann, author behind GrubbsnCritters.com. 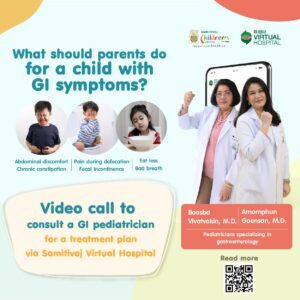