The Joe Louis Thai Puppet Theatre is the only puppet troupe in Thailand that can lay claim to being direct descendants of the founder and inheritor of Thai classical small puppet theatre, of over one century ago. It was initiated by Master Sakorn Yangkhiawsod (Joe Louis) who was born into the puppet troupe, to puppeteer parents of Master Krae Saptawanit. The Thai classical small puppet performance disappeared from Thai society for almost 50 years after World War II and was introduced again in 1995 by Master Sakorn.

From 2001, the Joe Louis Thai Puppet Theatre put on nightly shows in the Suan Lum Night Bazaar in Bangkok. The troupe nearly collapsed in 2004 when it could not afford the rent of its venue, but was saved after a public outcry and funds were raised. At the time of Sakorn’s death in 2007, the future of the Suan Lum Night Bazaar was in doubt, and a new troupe formed by Sakorn’s children started giving shows in the 578-seat Aksara Grand Theatre.

The Aksara theatre has now been closed and Joe Louis Thai Puppet Theatre is currently at Asiatique, the Riverfront. It is under renovations until late 2016; at the moment, there is a free 20-minute show for restaurant patrons every day except for Mondays. 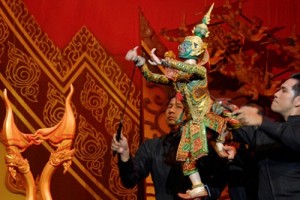 The Racquet Club 49 offers an insightful experience to learn climbing. Beginners, in particular, can find the…

If you are looking to explore the most intricate of rock climbing paths in Bangkok, Gravity Lab is certain to…

Bangkok welcomes F5 Climbing Center to eager participants of all ages. From upside down cave climbs to…