In the past year or so, Bangkok witnessed the opening of two new winter-themed indoor amusement parks, Snow Town and Harbin Ice Wonderland. How do they compare? Here’s what we think…

Snow Town revolves around the concept of a Euro-Japanese mountain village. The artificial snow, which is confined to a specific area, is around 30 to 40 centimetres thick. It is comprised of tiny ice chips, rather than light, fluffy flakes, and it can be used for skiing, sledding, building snow forts and snowball fights.

The air is cool, but not frigid, and a long sleeved shirt, long pants and socks will suffice. Boots are provided with the cost of admission, which allows for 30 minutes of play in the snow (you can also just pay a basic admission fee to enter the premises and walk around the village, without entering the play area). Patrons can rent other winter clothing items, plastic sleds, digging equipment and skis.

Given the limited snow play area and small slope for sledding, Snow Town is more suitable for younger children. However, kids who have experienced real snowy winters may find Snow Town lacking in authenticity and thus underwhelming.

For those who have worked up an appetite, the village houses a number of Japanese restaurants and cafés that serve Hokkaido specialities, ranging from sweet potato fries to ramen noodles and jengiskhan beef. There is also a fun little craft room called Sketch Town, where, for an additional fee, kids can colour a picture of a vehicle or building. Their creations are then scanned and projected as interactive 3D images on the wall. Children also get a printout of their picture that can be used to make a 3D paper model.

Harbin Ice Wonderland, on the other hand, envelops visitors in sub-zero temperatures. You will definitely have to don jackets, hats, socks and gloves to keep warm. Such clothing can be rented on the premises, but you can bring your own to save money. After getting dressed, you’ll wait in an acclimatisation zone to allow the body to adjust to the extreme change in temperature.

The highlights include a town of intricate ice carvings, including a pagoda, temples and global landmarks such as Big Ben, the Eiffel Tower and the giant guardians of Bangkok’s Grand Palace, among many others – all paying homage to the city of Harbin’s celebrated annual winter festival. Further inside is a play area with frozen slides, an igloo and a toboggan run, which are great fun for children and adults alike. Kids can also enjoy a small area with faux snow, which is light and fluffy, for a snowball fight or building their own snow creations.

For refreshments, an ice bar serves drinks in mugs carved from ice at tables of ice but it is so cold inside, you may want to skip this option. Also, there have been reports of injuries so caution is warranted when playing on the icy slopes, as well as on the zippy 20-second toboggan ride.  Coupled with the intensity of the cold, such issues make this park more suitable for older children.

All in all, both Snow Town and Harbin Ice Wonderland provide an afternoon of discovery and play, as well as plenty of photo ops. They offer a novel experience for kids in Bangkok – each with their own distinctive character and feel. 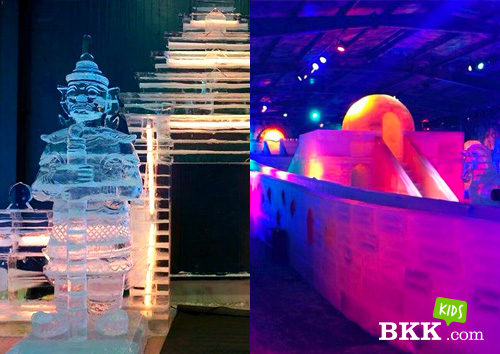 PrevPreviousKidZania Bangkok, a Kid’s World
NextBangkok Places: 5 Things to Do by the RiverNext
More information